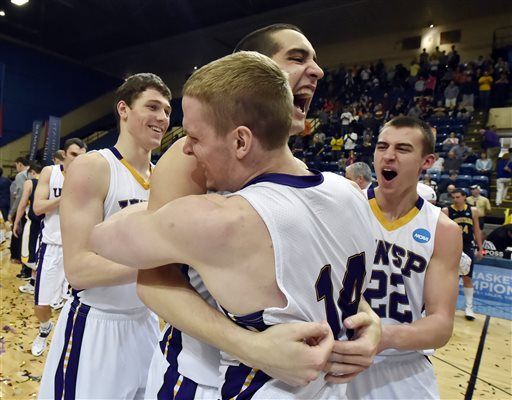 There are times as an avid outdoorsman where you are able to share your passion and obsession for the great outdoors with others. A rarity occurs when that opportunity becomes a time stamp in a relationship between close friends.

Exploring the great outdoors offers endless, priceless opportunities to create lifelong memories with friends and family. The 2018 Wisconsin gun deer season offered one of those opportunities, of which I was fortunate enough to take advantage.

During college I was lucky enough to have a teammate and roommate with whom I developed a close friendship. I roomed with Jared Gjertson all four years of college and we are roommates once again (along with one other former teammate), as Jared studies law at the University of Wisconsin Law School.

Jared and I have shared time turkey hunting in the spring and fishing during the summer and winter months. After turkey hunting in the spring of 2018 Jared, having completed hunter safety just weeks earlier, expressed interest in accompanying me on a whitetail hunt. I told Jared I could do him one better; I would let him take the hot seat and I would accompany HIM. He immediately agreed.

Fast forward to the fall of 2018. I had permission to hunt a property with an overabundance of doe. I watched a significant amount of doe activity all throughout the bow season and held off, knowing that Jared would be in the stand come gun season in November.

With limiting schedules, Jared and I only had a 24 hour period to make his first harvest happen. Jared arrived at my house around noon on Thanksgiving and thus the 24 hours of first time experiences began. We had a solid plan for the next 24 hours and Jared was excited. First on the agenda was taking the rifle out and letting Jared shoot several practice rounds at a target. Although he had some experience shooting a shotgun, he had never shot a rifle before and I wanted to establish a comfortable range for him to make a confident, ethical and fatal shot. After getting acquainted with the .30-30 lever action and firing 7-8 rounds, Jared was more comfortable with shooting and had his confidence increased. Let’s remember this was his first time ever shooting a rifle and we were headed to the woods just hours later.

After a tasty Thanksgiving dinner with my family, Jared and I prepared for our first sit. Due to weather conditions and wanting Jared to have an enjoyable experience, I decided against the property I had watched all fall; and instead received permission to use a close friend’s Shadow Hunter box blind, which looked over an acre food plot.  Again, another first for Jared. The action that afternoon was slower than expected. My friend had built up our excitement by sharing that a regular group of does had been feeding on the food plot around an hour before dark, but unfortunately, we only saw a few yearling does and a two and a half year old buck that was busted up and not on the hit list. Even though that buck was off limits, this encounter gave Jared his first opportunity to see a mature buck through the scope of a rifle. The buck grazed in front of us for nearly 20 minutes as Jared and I watched his every move. I enjoyed the opportunity to share that time in the stand that afternoon and answer some of Jared’s questions as well as teach him a few things about this great sport. 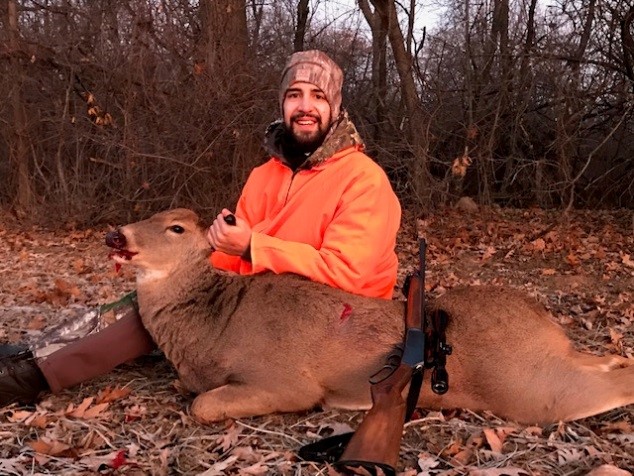 That evening, venison from a prior harvest was ready to be picked up from the local butcher my family used. I knew Jared would be intrigued by this as it was, you guessed it, another first time opportunity. Enjoyed it he did. He was fascinated by the process of how deer are handled from the moment after the kill to the final packaging of the meat. While we were at the “Meatshop” we had the pleasure of sharing some time with fellow hunters who were there picking up meat and helping process other deer. It was cool for Jared to experience that shared comradery between whitetail hunters.

The next morning the pressure was on. The weather was right for us to sit in a blind I had set up weeks before and I was very confident that we would have a chance at Jared’s first whitetail. Up early and to the stand well before sunlight, Jared and I were settled and waiting for the sun to rise over the freshly frosted picked soy bean field.

We heard minimal action in the woods to our back and as the sun peaked over the horizon, so did our hopes that one of those furry white tails would soon show.

As if we wrote our own script that morning, about 25 minutes after the sun rose and just as they had done all fall, two mature does stepped out of the woods southwest of our location. I had a good inclination of the direction they were headed and I made sure Jared could see them and was comfortable and prepared for his shot.

The series of events that followed happened rather quickly. The first of the two does started heading on a straight line for the woods to our right. Its gradual walk turned into a slight trot and the doe was soon under 100 yards away. Not wanting to lose this opportunity for my friend, I quickly asked Jared if he was ready and if he could see the doe through his scope. He answered, “Yes, I got it.” I told him I was going to stop the doe and at that point he would have his shot……

The doe approached 65 yards when I let out a quick grunt. Just as I hoped, the doe stopped dead in her tracks and provided a clean broadside shot. THIS WAS IT, IT WAS GOING TO HAPPEN…..At this point the trigger should be pulled and the doe harvested quickly and ethically.

After the quick grunt, the doe stood, confused, trying to locate where the sound came from. We were only a few split seconds away from the deer bolting! I quickly whispered to Jared, each time becoming a little more intense, “Now, shoot…..shoot…..shoot!” BOOM!!!!!!……

What happened next was a moment I will never forget about this hunt. I was looking over Jared’s shoulder the whole time and after he pulled that trigger I knew what had just taken place. The doe’s front left shoulder/leg tucked up tight, telling me Jared had made an excellent shot in the vitals. I was so excited for him I put my arm around him and told him with great emotion, “You smoked her, you got her, good job!!!!!” I could tell Jared seemed unsure about his shot, as he had never before had this experience. I reassured him that she was down not far into the woods and after giving her a few minutes we would head out to claim his trophy.

That we did. As we headed out of the blind and walked over to the point of contact to search for the start of the blood trail, I soon realized this track job would be over before it began. I looked up and only 15 yards from where it stood when Jared shot, his first trophy whitetail doe lay on the edge of the woods, harvested quickly and ethically. Finally, Jared let out a breath of relief and smiled as he had accomplished what he came to do. Then of course, last but not least, Jared happily dragged his deer out of the field and learned how to properly gut/skin out a whitetail.

This was and forever will be 24 hours I will never forget. Being able to assist a genuine friend and an even better person on his first hunt ever, brought me more joy than I have ever experienced hunting on my own. Exploring the great outdoors provides unforgettable opportunities like this and is one of the many reasons why I am proud to call myself an outdoorsman. Congratulations Jared!!