Wisconsin’s Waterfowl Is What You Make Of It 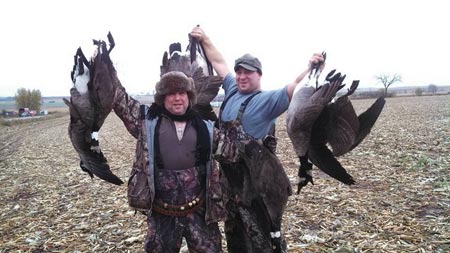 From early goose season to late frozen ground field hunts, along with the 60 day duck season in between, I find myself scouting, hunting or taking customers out well over 100 days from September to December. Whether I take a group of customers, tag along with buddies, or it is just me and my dog, every hunt is a great experience. But to stay productive throughout the entire season, I have to be extremely versatile. Scouting harvested wheat and cornfields, to flooded rice and cattails, and also bigger open water, keeps me on the move.

There is nothing more important than burning a whole lot of time and gas while scouting and learning. I love to watch and learn the bird’s reactions and movements in all different situations, so scouting to me is quite enjoyable. Stomping through the mud and muck hours before sunrise many days in a row is not considered miserable whatsoever for a guy like me that lives to chase waterfowl. I often think that my dog is the only one as excited as I am at that time of the day. We spend so much time together, and I think we are both happier laying in the marsh than we are in bed with the anticipation of whether we are going to outsmart the wary waterfowl.  It is not just the pulling of the trigger, it is all of the other elements; getting there, the scouting, the decisions on location, and all the possibilities with the decoy spread that really makes waterfowl hunting the competitive challenge that I like.

The 15-day goose hunt in September has a large limit of five geese per person per day. This early goose hunt is to help out the land owners and farmers when they are overwhelmed with nuisance flocks of local geese. By mid-August, the juvenile geese are ranging out several miles from their home water hole, which is usually still their roost water. They are in search of the freshly harvested grain fields and midday loafing ponds for a drink. In the past few years during this 15-day early hunt, I have enjoyed some of the best hunts the entire waterfowl season has to offer, even though there are no migration numbers of birds to work with yet. It is important to be on the ‘x’ during these hunts because I am targeting specific flocks of geese. The birds are not call or decoy shy yet, so you can put the whole flock right in the lap of a large group of shooters, and that is extremely exciting. Just like any time of the year, I try to find the best pattern possible, which takes a lot of scouting. I try to factor in the change in weather, along with any changes in their flight pattern, to choose the right hunting location each day. My good hunts this time of the year usually come from a variety of farm fields and smaller water holes.  Stable weather and  cooler nights will usually send the early season geese on their way to a grain field for some fat building protein at the first light of the morning, and then rush to a small nearby water hole mid to late morning to wash down their meal. When it is wet or rainy, I’ve noticed the geese tend to spend their day feeding in young alfalfa fields, newly seeded wheat or other young green stubble. It seems to me the moisture on the wet greens will hold the birds most of the day and throw off any consistent pattern that you have recently developed.

NO SHORTAGE OF ACTION

New to Wisconsin last year was the early teal season. Shooting teal in September on their local nesting marshes is as easy as shooting barn pigeons out of the silo. I guess what I mean is there is no shortage of action, but they are small and quite fast. It doesn’t take much skill to bring teal into shooting range early in the year as they fly around low on most of the marshes, taking turns plopping into almost everyone’s decoy spread. It seems to me teal like to stay in their own flocks, so as the flocks get shot up and busted apart, they will usually decoy that much better into our teal decoy spread trying to get flocked back up with their own kind. Unlike the large Canadian goose breast that makes great sausage and hot sticks, the meat on a teal is very tender and not nearly as gamey tasting as some hunters call ducks. My favorite teal meal is the tender breast meat, wrapped with bacon and stuffed with a little pepper and cream cheese, then lightly grilled until the bacon is done. If taking your dog out on a hunt isn’t a good enough reason to get out, then that grilling recipe right there should top off a good teal hunt for anyone. 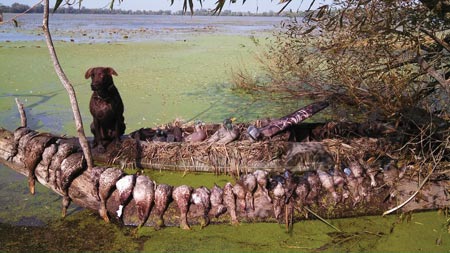 When it comes to chasing ducks during the 60 days of our Wisconsin season, there are a lot of highs and lows. We get a lot of great hunts with the large number of local puddle ducks here in Wisconsin. But as they get hunted hard and educated, they usually get pushed deep into the refuges and private land that is not legally accessible for the majority of us hunters. These birds grew up and lived all summer in the same local waters that hunters are trying to fool them in. I usually have a very solid pattern from the roost to feeding areas for local ducks during the first part of the 60 day season because I watch them many times during August and September. However, as these birds get smarter and harder to get into range, I am always watching for the trickling migration of new birds moving through. Migrating birds are fun to hunt, especially after our local ducks get hunted too hard. It’s usually gadwall and widgeon in the marshes, mallards in the cornfields and divers on the big lakes that keep me busy scouting and re-rigging for the next hunt once the migration kicks in. I definitely have to scout a little harder, longer, and cover much more area to put a pattern together for these birds as they migrate through their temporary home.  I like to mix up hunting the feeding areas, such as rice or lily pad fields, with hunting the roost water. Depending on the amount of birds in the area at the time, I usually don’t like to show them the same setup multiple days in a row because that will definitely change their flight pattern.

As I get near the later part of duck and goose season, most other hunters are focusing on whitetails in Wisconsin.  November and December means cold ice and usually snow during some of our hunts, and that is the main reason I hunt with a Chesapeake Bay Retriever.  Hunting right up until the end of our season can be nearly impossible without a heated place to thaw the ice from the boat and decoys every night.  This time of the year, when all the small puddles and marshes are frozen solid, I go back and forth from bigger lakes that stay ice-free longer to harvested grain fields. On the big water, I like to put out a large spread of about 150 decoys (mostly bluebill, canvasback, and redhead). Off to the side, I always put a smaller flock of mallard and black duck decoys. I have experienced low, fast flying diver ducks and flocks of Northern orange-footed greenheads, all working my spread at the same time. During this cold late part of the waterfowl season, when I find mallards and geese using cornfields, I like to cover my layout blinds with a few dozen full body goose decoys and string lines of active feeding mallard decoys downwind from the blind. I will leave a 20 yard gap between the blinds covered by goose decoys and the full body duck decoys, just for a few mechanical motion decoys. This is generally the kill hole where I have literally watched thousands of late season mallards and geese trying to land in all at once. Whether it’s the skiff, the mud motor, or full-bodied decoys in a cornfield, you can bet that my dog Riley and I are going to be where the ducks are.